I’m currently on a plane with no wifi and no working charger ports due to Royal Air Maroc and their horrendous service, so I got to writing this post about my most recent trip to Morocco. People are always asking me how I’m always traveling so much or where I’m headed to next and I never have a straight answer. The answer lies within flight deals. I usually let the deals I find dictate where I’m headed next and luckily for me I have an occupation and schedule that caters to this spontaneous lifestyle of mine.

Now, Morocco initially wasn’t on my list of places to travel this year but there was a deal I couldn’t pass up. I found a flight to Morocco and Portugal for $356 roundtrip on theflightdeal.com. It sounded like a steal to me, so a few of my boys and I booked the flight. Let’s fast forward to Marrakech. Marrakech is a magical and stunning place to say the least. We stayed at Riad Star in the Old Medina/Jemaa El-Fnaa.

Here’s a picture of our host walking us to our riad. 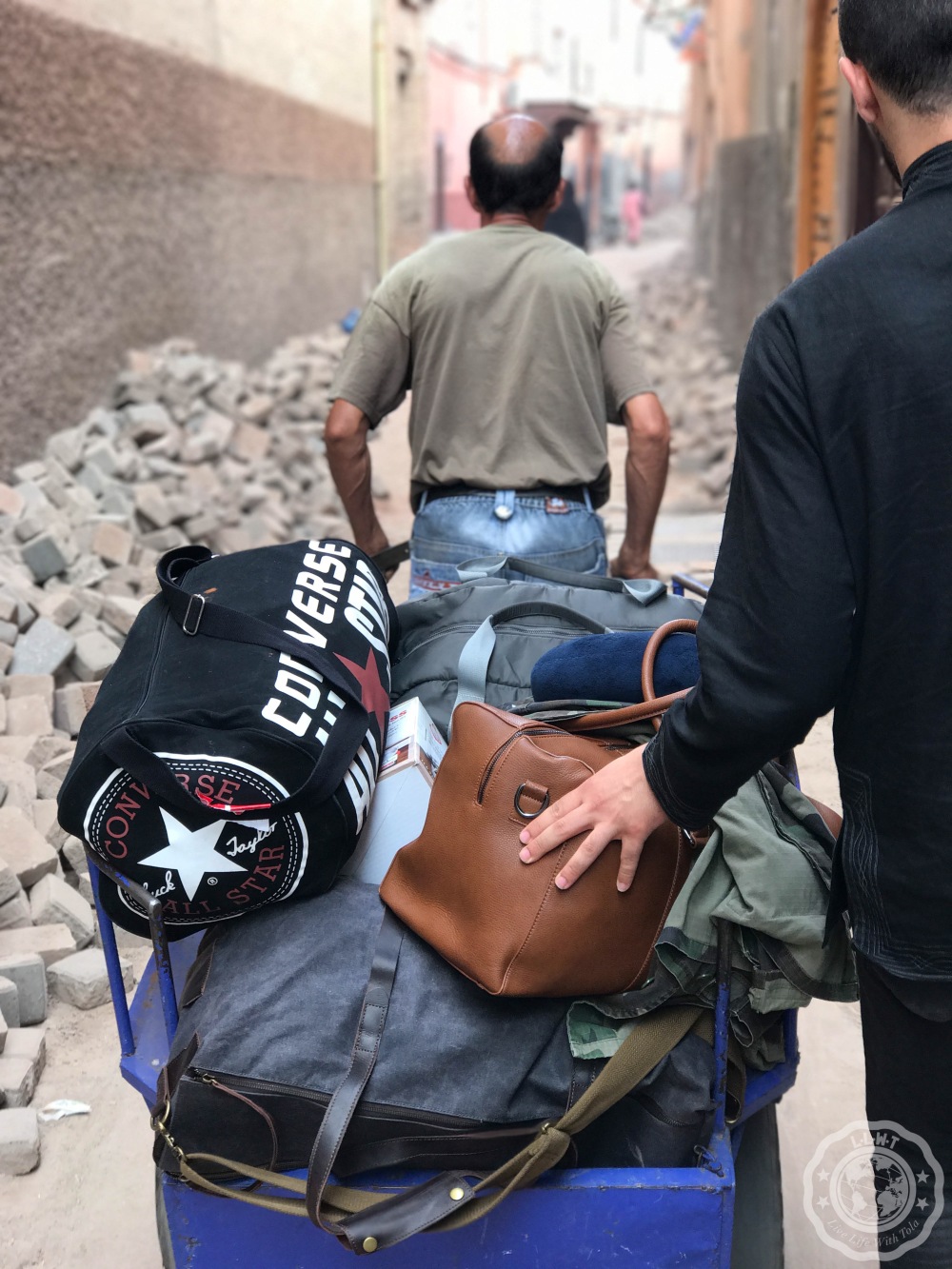 Riad’s are traditional Moroccan palaces with an interior garden. The decor of the riads in Morocco are remarkably beautiful and jaw dropping. You’ll feel like you’re in a Kings castle by the ambiance, architect and hospitality. Looking from the outside in I found this Riad to be a diamond in the rough. 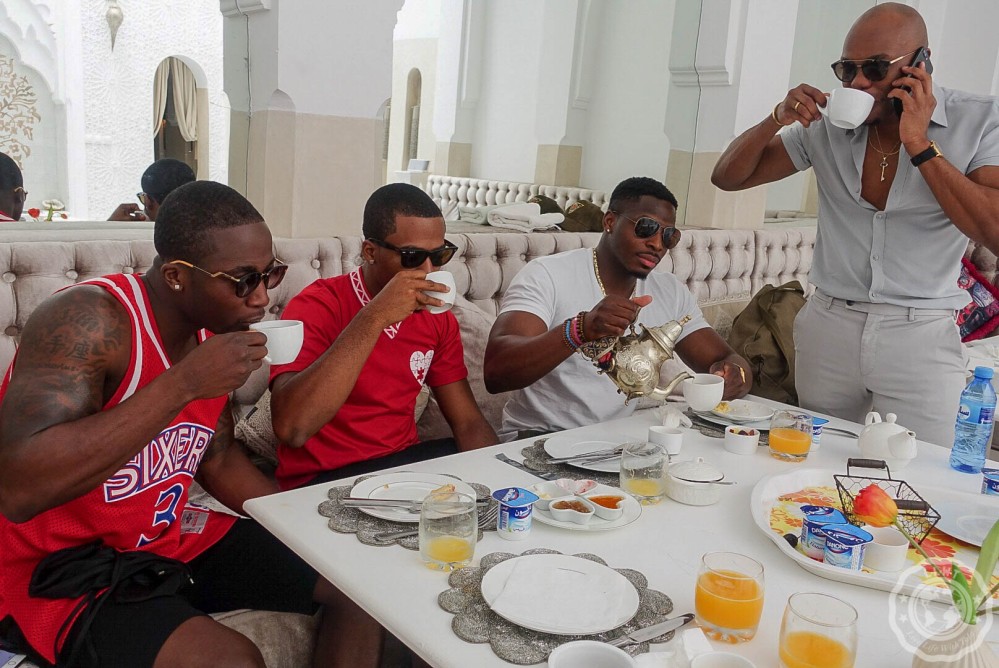 This particular Riad was situated right in the heart of the hustle and bustling maze of the Old Medina. We got lost frequently but luckily for us, the host gave us a phone whenever we needed help with directions.

The Medina reminded me of New York City because there was so much going on at once. There were people out on the streets haggling, kids playing, people sleeping, craftsmen making things, animals all around and people on motorcycles zooming all throughout these very narrow and overpopulated streets.

For those who get claustrophobic quickly, the Old Medina might not be for you. As for me, I had no choice but to take in every bit of the experience. Marrakech has a lot of life, art, history and personality to it. Although it was kind of irritating dodging motorcycles every few seconds and people persistently following us for money,  I liked the natural beauty of it all.

This is one of first people to help us with directions in Marrakech. We bumped into him on numerous occasions. Thanks for the help!

We stayed here in Marrakech for two nights which didn’t feel like a sufficient amount of time. With two delayed flights basically ruining our itinerary it felt like we only spent a day here. Although we didn’t get to see certain landmarks like the Ben Madrassa, Saadian Tombs or the Hassan II Mosque which is located in Casablanca, I still appreciated my time and the culture here. Throughout our stay we went to the magnificent Le Jardin Majorelle, rode camels, ATV’d and partied at Theatro.

Unfortunately for us Ramadan began the evening that we arrived in Marrakech so for those planning to travel here make sure to be aware of any Muslim holidays. Due to the start of Ramadan many places started to close very early on the day we arrived and the day after. Around 5 pm the market started to close down so we headed down to Nomad, a well known restaurant in the square. The food, service and ambiance was good here.

Once we stepped out from Nomad the souk was suddenly empty. It was a shock to see how Ramadan can make such a populous and hectic environment turn ghost. The magic began to pick back up the next morning until the locals  were ready to break their fast again the next evening.

For those interested in going, I would stay in the outskirts of the Old Medina/Jemaa El-Fnaa.  If you’re looking for that local experience or if you want to shop all throughout your time then this is the place to be. They had a lot of leather, jewelry and garments for cheap but it was just too crowded. The people were nice and helpful when it came to directions but always wanted money for the help they insisted on. Some people would get mad if we gave them U.S. dollars or too little of a tip which was annoying at times but aside from that, I found Morocco to be a relatively safe place. It’s filled with culture and has its own unique touch to it so don’t shy away from going if you have the chance. I just wouldn’t recommend flying with Royal Air Maroc, unless you absolutely have to. I honestly never flew with such a poorly constructed airline before. From the flight crew to the planes.

On another note, be mindful about the travel bans placed on this country by your President. You can’t carry on your laptop, camera or any other electronics aside from your phone when coming back into the U.S. so ask questions.

If you have an questions or concerns to ask about this destination I’m open to answer.

8 thoughts on “Hidden Treasures of Marrakech”

Welcome to my website! I'm a 25 year old dental hygienist by day and student by night. I love to travel, cook, party, dance, workout and just enjoy my life to the fullest and I believe you guys should live it with me! So allow me to give you a little insight into my life with this website. I want to give you an experience!
%d bloggers like this: